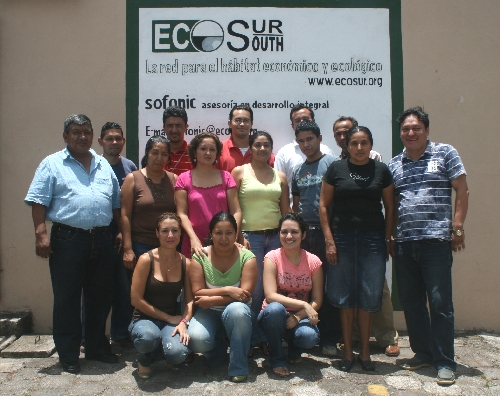 EcoSouth, an environmental group and recently-signed Cyclo Nord-Sud partner, has roots dating back to the early days of the 1979 Nicaraguan revolution, when the Sandinista uprising successfully overthrew the Somoza dictatorship.

The multi-faceted organization focuses primarily on the staggering problem of inadequate and insufficient housing in the developing world. What began as an initiative to design better roofing tiles has grown into an international knowledge-sharing network between countries facing similar challenges such as natural disasters, widespread poverty and lack of skilled local labour.

Over the past 30 years, EcoSouth has built hundreds of schools, dozens of hospitals and countless social housing projects that have made owners out of renters. They also currently design, build and share expertise on pre-fab permanent disaster-relief shelters, and are actively involved in helping the people of Haiti recover from the recent catastrophic earthquake.

Through EcoSouth’s two-year youth training program, young people facing limited career options learn advanced construction techniques. Students, often from troubled backgrounds, earn a wage working and learning in the field four days a week. They spend one day a week in the classroom focusing on theory. After graduating with a diploma recognized by Nicaragua’s National Technical Institute, they take their new knowledge with them into their communities, helping to grow local expertise throughout the country.

Whereas the organization once depended on donations from partners in industrialized nations, it has since become self-sustaining through the creation of an affiliate corporation, EcoNic, that uses the group’s wealth of architectural and construction knowledge to design and build high-end ecological and disaster-resistant housing.

EcoSouth has been running a bicycle project for the last 25 years.

With inadequate public transportation and limited means, most people, especially in rural Nicaragua, have no option but to walk several kilometers every day to and from work, school or market. EcoSouth’s bike project’s mission, as pertinent today as ever, is to provide bicycles as an accessible, environmentally-friendly means of transportation for the masses. Over the years, they’ve found owners for tens of thousands of recycled bikes.

Originally, EcoSouth purchased ‘raw’ bikes from India and assembled and sold them in Nicaragua. For well over a decade now, they’ve nurtured partnerships with organizations in the North to receive shipping containers full of used, functioning bikes. This has the benefit of offering a variety (road, BMX and mountain bikes) of high-quality machines at affordable prices. The social and economic benefits are measurable, whether the new cyclists be vendors, students, professionals or labourers. The widespread use of bikes helps increase environmental awareness, education and economic opportunities for Nicaraguans.

Recycling bikes from the North also keeps valuable assets from ending up in our landfills, helps build a just model of international cooperation and frees up space in your garage!

The current challenge EcoSouth’s bike program faces is one of sheer quantity; with one container per year, the program barely supports itself, paying administrators, storage, shipping and maintenance. It means that over 400 people have decent bikes who didn’t have them before. With three or four containers a year, however, the bike program generates enough revenue to be completely sustainable and contributes surplus funds to EcoSouth’s social housing and disaster relief projects. In short, the more bikes EcoSouth receives the better. There’s no shortage of customers. If you live in Quebec, please take a minute to check out when Cyclo Nord-Sud is holding its next bike drive in your area. Dust off that old Norco, throw it in the trunk and pass it on to someone who will truly appreciate it. If you live in Quebec or elsewhere (and that pretty much includes everyone), please donate to the noble, cash-strapped charitable organization that is Cyclo Nord-Sud.

Stay tuned for more tales of adventure from Central America and (gasp!)… BEYOND!